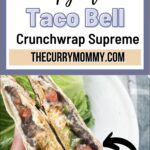 If you love tacos and tostadas, then you need to try this! The combination of fresh ingredients, crispy corn tostada, Nacho Cheese Doritos, and sour cream make this Taco Bell crunchwrap supreme recipe vegetarian and kid friendly!

Thank you Taco Bell for the recipe inspiration!

Why You'll Love It

Because it's better than the original version! There, I said it :). I love Taco Bell, like most of you, and any homemade version of their recipe is a winner dinner for the whole family.

Plus, these Taco Bell crunchwraps can be made with a lower sodium level at home.

Planning Ahead and Storage

Unfortunately, these Taco Bell inspired vegetarian crunchwrap supremes do not store well when pre-made. However, you can plan ahead! Prep all of the ingredients ahead of time then lay out an assembly line that works best for you. Cook the crunchwraps right before eating to keep the tostada and Doritos crispy.

Drinks- An iced Coca Cola or Pepsi! Nothing beats a soda pairing when it comes to Mexican food or anything cheesy, right? Let me know what you think in the comments below!

Mexican Rice- for a complete meal! 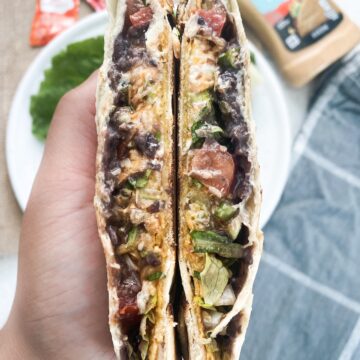 Note 1- blend together 12 oz of whole black beans, 1 thai chili, 1 clove of garlic, salt, and McCormick Enchilada Seasoning together. Note 2- If making this for kids, then you can eliminate the spices and add ingredients s/he likes. My little ones love black beans, crispy tostada, doritos (they crush them themselves), sour cream, and veggies inside of their crunchwrap.
Tried this recipe?Share your photo and tag @TheCurryMommy or #thecurrymommy!

I've always preferred Azteca, but any thin variation will work.

What are refried beans?

Cooked whole beans that are smashed and then tempered with flavor. Check for my recipe in the Notes section of this recipe.

What are some vegetarian friendly Taco Bell items to order?

Can I add guacamole to this recipe?

I would serve it on top with an extra slather of sour cream.

Why use enchilada seasoning vs taco seasoning?

It tastes much better!

It can be, when homemade. Be sure to use ingredients that meet your dietary needs such as gluten free, dairy free, etc.

Can crunchwrap supremes be air fried?

Yes! Once you have made it, brush or spray it with some oil. Then, transfer it to the air fryer basket for just a few minutes at 350 degrees. Low temp does the trick!

Love Mexican food? Give these Curry Mommy recipes a try!