Eggplant is also known as ringan or baingan in India. This Gujarati shaak recipe is a traditional one made a bit healthier with sweet potatoes. Aubergine eggplants are commonly used in Indian eggplant recipes. Make this baingan recipe with peanut oil for optimal flavor-trust me.

Growing up baingan was my favorite shaak to eat. I loved it in any form whether it was stuffed, sauteed, or even raw! I remember eating fresh aubergine eggplants from the garden-IN THE GARDEN! My dad would pick them and eat them as is and well... Monkey See Monkey do.

What type of eggplant to use

For Indian eggplant recipes traditionally aubergine are used. This variety is a small eggplant with thin purple coating. They can also be found in a lavender purple with white stripes which are delicious as well! Homegrown aubergine eggplants are my favorite, but in the US we are accustomed to getting what is available at traditional Indian Grocery Stores. Here are some options to pick from.

"Eggplant is the king of all vegetables, that's why it has a crown on its head." - My Grandma

Prep the eggplant to prevent browning

Usually for ringan nu shaak you want to have less outer peel. Using the guide above peel and trim the ends on the eggplant. Continue, by cutting the eggplant into small chunks and either place them in cold water to rest until you are ready to cook or wash and cook immediately. 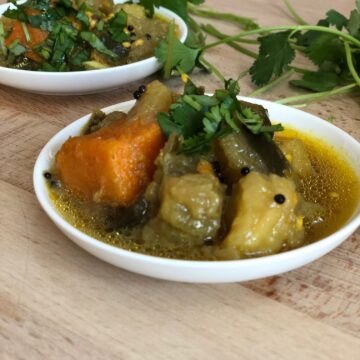 Tried this recipe?Share your photo and tag @TheCurryMommy or #thecurrymommy!

I love sharing easy to make global recipes for the whole family! Come browse follower favorites which range from butter chicken to creamy mushroom pasta. Read more about me here.