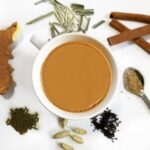 A traditional cup of chai consists of black tea, Indian spices, and full-fat milk that is boiled together for a few minutes. It is a common drink that can be found at an Indian Cafe or Indian Restaurant, which is often served with packaged fried snacks, bread butter, fresh fried potatoes (pakora), or even Indian Fried Rice.

This is the main caffeine drink of India.

My history with Chai

Chai is pronounced "Cha" in my house, which is a Gujarati word, and it's made a countless number of times. Growing up, I felt like I was a barista in my own house! No Joke, I made cha all day long it seemed. Perhaps, that's why my recipe has been perfected throughout the years. I think my Mom had a total of 5 cha pots at any one given time.

Every single time a person would come over, it was mandatory to make cha. There were no if, and, or buts. Actually more like forcing your fellow guests to drink some caffeine as if it was an India Cafe. Was it so we could all fully engage in a conversation? Who knows, but within those years I learned to enjoy a cup of HOT CHA every time it was made. So you're probably thinking-"were you wired on caffeine?" I don't think so, because instead of drinking a large cup of chai which we call an "American Dose", we drank an "Indian Dose". YUP, that's how we distinguished what portion we wanted. There was no Starbucks lingo happening in the home.

Can I make a keto-friendly cup of chai?

Of course! I can't tell you how amazing a cup of chai would taste with cream instead of milk. There will be a much thicker film of fat that comes to the top of the cup which is known as Malai. It is actually my favorite part.

Can I make Chai in a microwave?

Okay, as much as I love taking shortcuts I do not recommend this. It just doesn't have the same flavor as you would get when the ingredients are boiled together in a pot. So, can you make it-yes. Do I recommend it, no.

Can Chai be used to treat illness?

If you were sick then a strong ginger chai was exactly what you need, according to my grandparents. My mom added ghee to it sometimes (not my favorite-AT ALL-just saying). Turmeric can also be an addition, but also not my favorite.

What spices can I add to my chai to make it taste like an Indian Cafe?

What is an Indian Cafe?

I have a friend who opened a cyber cafe in India, in 2000. I was very impressed with the facility. It consisted of cubicles with a chai vendor. The "chaiwala" as we called him came around to ask if you wanted a cup of chai. It was more like a "shot" of chai but I can't tell you how tasty that shot was!

An Indian Cafe is one that mimics a Starbucks type of a set-up that includes many different types of chai on the menu. It ranges from ginger chai to lemongrass chai. Every single variation is absolutely tasty and worth raving about.

Below you will find the recipe for my perfect cup of chai. I hope it brings you just as much comfort as it does to me. 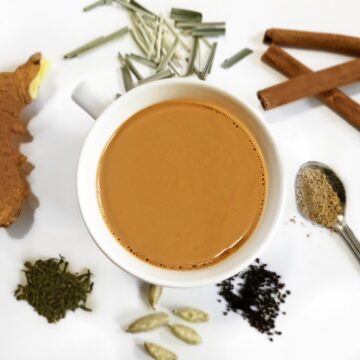 VARIATION OF SPICES (pick one)

Tried this recipe?Share your photo and tag @TheCurryMommy or #thecurrymommy!

Here's a little personal story... I recently had a friend come over and offered to make some cha (because that's what my parents taught me!). She was expecting the Starbucks version, I kid you not. When she saw me bring out a pot, spatula, strainer, etc she was shocked. When I finished making it, she was impressed and called it "MILK TEA". My immediate response "this is not Chai BOBA". But she was right, it is milk tea! Don't let that alarm you, because you can make this pot of goodness with any form of milk you like. I use oat milk on a regular basis because I do try to live a dairy free life, unless its Raw Milk of course. Because Organic Pastures Raw Milk is just AMAZING.

I love sharing easy to make global recipes for the whole family! Come browse follower favorites which range from butter chicken to creamy mushroom pasta. Read more about me here.